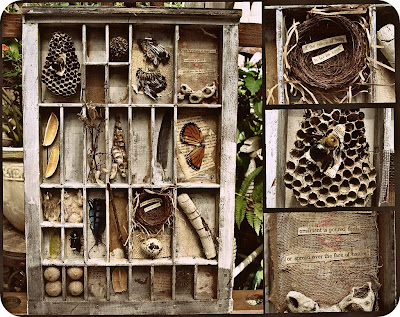 (hint: click on the picture for a nice close up view of the goodies inside the box)

for awhile i have been collecting the old typesetting drawers. why? i don't know, i just like them. i had come across a bunch that were very inexpensive, so we picked them up. they've been sitting on my front porch in the "wood shop" section just waiting to be played with. a few months ago, Lynn Perrella (see her inspiring piece, "Summer Sampling" here and then when you are done, look at her assemblages they are stunning!) did a type setting drawer art piece and then it was in Somerset Studio which is where i saw it. immediately i thought, so that's why i've been collecting those! the funny thing is though, as many of my friends have also been collecting these (before the article came out). it's interesting how my friends and i are drawn to very similar things. i keep wanting to coin a term for this type of girl that i am, but also that i see in my friends. i know jane has some of the drawers, kim has some, a new blog friend, beth has some. and it doesn't just stop with the drawers. i was amazed at the similarities that i found between Jill and i (i met up with her at Handmade Faire). even down to random personality quirks and the fact that we both grew up in the military. my friend jane and i are constantly buying the same things (separately unbeknownst to us), wear the same perfume, stuff like that........ i was thinking of calling us "modern prairie girls with old souls". anyway, kim, of art dog's life recently created a drawer, which made me think of doing some for the country living fair. i gesso'd a few and then have been waiting to get back to them. then i was reading new blog friend, beth, of gypsy fish journal and was amazed to see the drawer she just completed. they both are stunning. so last night i decided i would make the one that i have been envisioning in my mind. i titled it "Nature's Bounty" and it is all things from nature that i have been collecting for over the last year. i love how it turned out. i'll be metal stamping a faceplate for the front of as well. the projects are fun and easy to do. it's a matter of gathering and gluing. i'm going to go back to my source and see if he still has any more trays. if he does, i'll pick them up and sell them for anyone wanting to do a project on their own. i'll keep you posted on that or let me know if you'd be interested in a tray and i'll contact you later. i also have a HUGE one that i 'll be creating with next. finding stuff to fill it up will not be a problem. this one will be more along the lines of using flea market items, dolls, fabric, or whatever i deem worthy to go inside!

in other fun news, my advanced copy of Altered Couture has arrived with my new article in it. it will hit the stands late July at Barnes & Nobles, Borders. my article is on page 125, 126 & 127. i'll scan pics of it later today.
Posted by kecia deveney at 12:03 PM