I am please to announce that I will be hosting artist Michael deMeng again this year in Wall, New Jersey. The dates are Oct. 5 and 6th 2013. 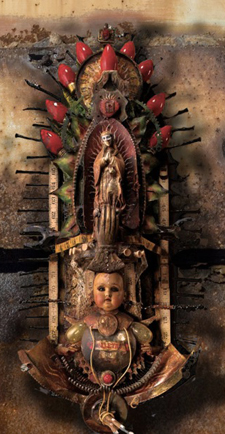 As far I as know there is no such thing as

a Saint or Deity of Discarded things,

which is a pity because

highways and byways looking for bits of

detritus to incorporate into
o
artwork. Seems like an activity worthy of

guidance or protections. In fact I recall

one instant where I was

with 10 or so students. On the side of

the road we passed a large

of a sudden everyone in the van starts

oohing and ahhhing. The

driver looked a bit bewildered, and

wondered what in the world a bunch of

gringos would find so interesting

about an orange-ish/red heap of metal.

Little did he know, that to us, it was as

if we came across the holy

grail. The possibilities of creation were

endless. In this class we are going to


saint or deity that will aid in our artistic

endeavors of finding and recreating from

some sort of structure to build of (such as an iron, a shoe, a phone, a shadow box…just about anything) we

will create a place for our effigy to

watch over our undertakings. This shrine

will be filled with all sorts of

unusual elements as adornment but will

also serve as a place to add future bits 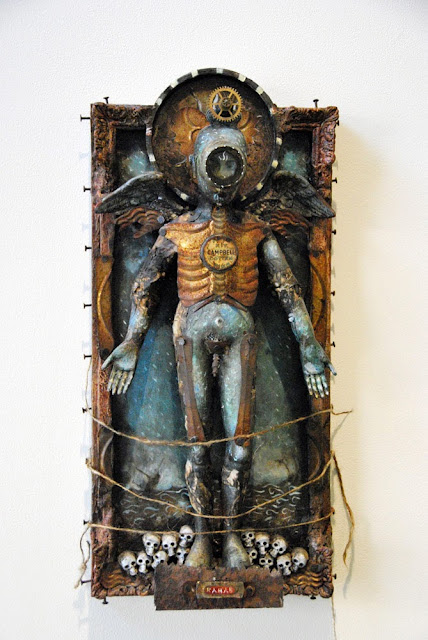 the fee is $200 paypal directly to Michael via paypal. Please email, me, at keeshagirl4@aol.com for more information.

what does it all mean? The meaning of Puppet Master

I painted this picture a few months ago and had no idea what it meant or where it came from. It just sort of evolved (which is the fun, surprising part). But this morning as I was getting Tucker ready for school, I kept looking at it, and suddenly realized what it all meant. 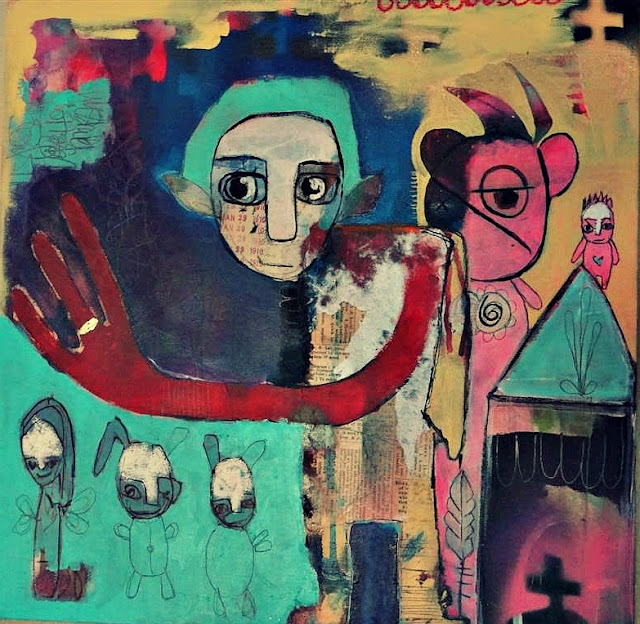 I kept looking at the wedding ring. It was something I added at the last minute and it was this mystery to me, like, who is this character married too? And why are those people dangling from his arm? 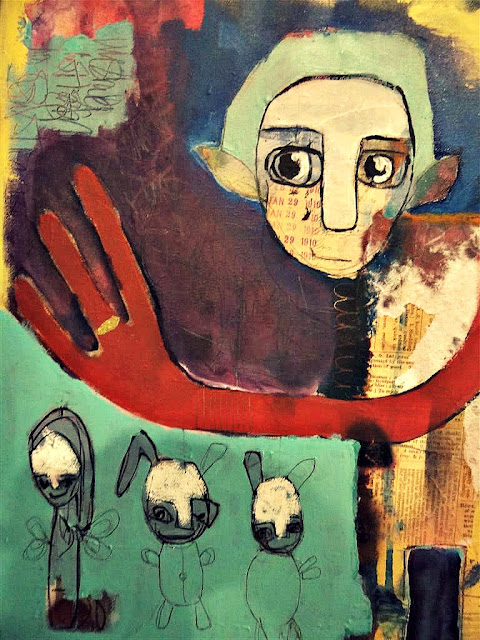 It finally dawned on me that the "Puppet Master", who  I referred to the guy with the red arm, is my husband, Jeff and the 3 characters he is supporting (they are not dangling after all) are me, dillon and tucker.

Jeff is very very strong (physically), so the red, bold arm, represents his strength. There was a time, in our past where Jeff's priorities where not so much about our relationship, but rather other things. He's always been a steadfast and great father, but in all honesty, I secretly felt he was a better father than husband. Over time as we have both grown and changed, he has matured. As we talk about our past, I bluntly summed up feelings by telling him, "you squandered that time in our relationship". he did not disagree.


Now a days, his priorities have shifted. it is less about the party and friends and more about taking care of us. He is learning that taking care of us  also means emotionally too. Committing emotionally to being a better partner, father and person. (i think we all do that as we age anyway....) I gave up trying to help Jeff with his emotional demons. I stopped playing police woman and trying to control things in him that were beyond my control. When I let go of  feeling responsible for his well being, I changed as well. My mantra became, "I can not make you happy". I can only support you, but you have to do the rest. He has become extremely supportive of my art journey. I couldn't ask for better support and the freedom it allows me to "just be myself".

He often says that his new role is all about supporting and taking care of his family. So in the picture, his strong arm is gently supporting us the best way he can.

The pink character standing behind Jeff represents me again.  It shows that I'm the serious one and he's the joker (note his smirk and my very serious expression). I have a degree in psych and would quietly stand behind him and understand his behaviors, all the while knowing that I couldn't do much about them. I have always been the voice of reason and patient. 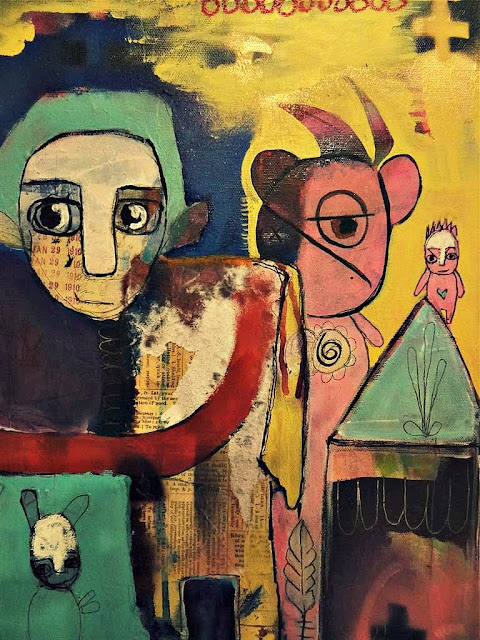 the cute little dude standing on the house is Dillon. He is pure joy and that he brought a lot of love back into our lives after Tucker's injury  He anchors our relationship. He is beyond precious to us.

and lastly, my house. my rock - my source of stability and sanctuary. While I am not a religious, church going person, I am spiritual and hold many beliefs and have a particular fondness for religious iconic imagery that you can find all over the house. growing up in the military, I moved around so much, that often felt there wasn't a lot of stability in the sense of feeling like i belonged somewhere or had an attachment to one spot. I lived as an invisible person since there wasn't much time to get to know people before moving again. I've lived in this house since 1995, a long time for me. While living in NJ isn't my first choice, I love my house, my property and what I have achieved here. Jeff wants to move, always looking for utopia, which, in my opinion, doesn't exist. Utopia to me, is here in my own home, surrounded by my art and love of life. 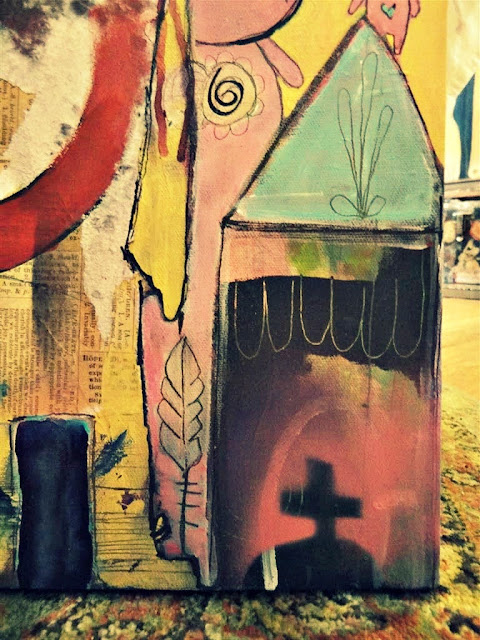 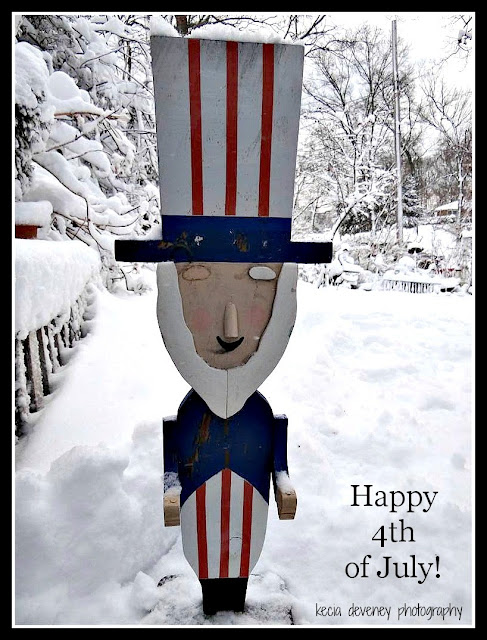