dog shaming at its best!

You've heard of dog shaming? It's where you take cute pics of your fur baby feeling contrite about some "alleged" offensive act, lol. I've submitted them. Kashie peeing on my suitcase. Sophie pooping in my studio and me tracking it all around (arg!). but here is the ultimate! For the last few days, Gracie has had UNBEARABLE gas. I mean , it's horrible. It was so bad that at one point I thought I would throw up and seriously my eyeballs welled up and teared.

So tonight in my studio, she gases me again and i start BITCHING! I  say to my husband, what the hell is going on? We start narrowing down things that she could be eating outside and then he suddenly looks contrite and says, "oh, i know what it is". He's been adding some "extra" treats (human goodies) to her meal. So of course I go ballistic! I tell him, YOU ARE SO DOG SHAMED!  and it's not Gracie's fault. He agreed, (good sport!) 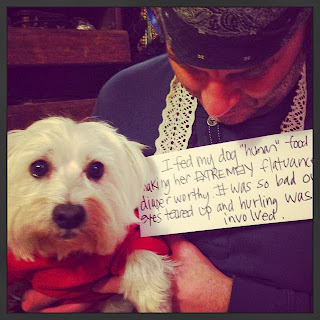 the sign says " I fed my dog "human" food making her EXTREMELY flatuence and diaper worthy. It was so bad that our eyes teared up and hurling was involved.
Posted by kecia deveney at 6:41 PM 5 comments

I tend to shy away from drama, don't like it, find it a wasteful time of energy. However, with that said, since I haven't blogged since late Aug, what a better way for a comeback but with DRAMA!

I've just returned from teaching in Stamford, CT at Art-is-You and was unpacking the car, putting things away, cleaning house, doing laundry, tending to tucker, pups and kitties (and birdie!) and prepping for my husband to leave over the weekend for a friends get-a-away.

It was early morning, 7:30ish, and I'm cranky cuz there's no half and half for the coffee, so jeff runs out to the store for more (hey, he drained the last drop, not me). I was getting tucker ready for school. Jeff came back in and i noticed my kitty wanted to go outside on the porch. But the porch was covered with wet leaves and kind of icky, so i told Lilly (kitty) that I would sweep it clean so she could lay out there as she loved to do. So I was sweeping when BAM, a yellow jacket stung me on my ankle.

So you have to now that about a month ago, a yellow jacket stung me on my chest while I WAS SWEEPING THE SAME PORCH (hint, i know now there must be a hive there somewhere in the ivy) and I had a very bad reaction to the sting. My neighbor who is a doctor, we were texting back and forth and after things settled down, insisted I see an allergist. So I did, last week. Got an epi pen and then yesterday on said DRAMATIC day, was to go in for my testing levels to the toxins.

So after this sting, i shouted, "gawd damit" and ran into the kitchen. Screamed for jeff that I had been stung. Took 2 benedryls, stripped out of my clothes (last time I got REALLY hot), got a cold cloth, took new epi pen and went into Tucker's room (because every reaction can be different, this time could have been nada, zilch, fine, so there is a "wait and see factor". Last time I had about 10 minutes before I became symptomatic. I was sort of counting on those 10 minutes. This time it was less than 2 minutes.

When I saw my allergist last week and we talked, I asked him, "what do your patients say about how they felt before deciding to use the epi pen?" he said, "Mainly they all mention a sense of impending doom". Hmmmmmmm. guess you'll know that feeling when you are there.

Fast forward, within a few minutes, my hands went numb and all I can say is that I felt that a black shroud was being brought over my head, kind of coming over the back of me. I saw the blackness and I screamed to Jeff, it's happening now. I'm going to do the epi and you call 911. But I sort of blacked out so we did the epi together (and have sinced learned that we should have left it in a bit longer). He caught me as I blacked out (turns out my blood pressure had plummeted) and then shook me to consciousness, where i said, "oh i fell asleep". Then i started vomiting. my head started POUNDING and the only thing i remember is insisting that jeff put my pants on!

he called 911 who arrived in minutes. gave me oxygen and an iv. asked a million annoying questions and then loaded into the ambulance. As i know now, Epi will make you extremely cold. I was shivering (and so glad to have on pants). Jeff had to get poor mr. tucker together, who along with the dogs are freaking out and then he would come to the hospital.

I was feeling weird like, "was i being overdramatic by taking the epi?" (you know that bastard called, "guilt" that lurks in every decision we make"). I kept picturing some old lady having a heart attack needing the EMS and here i am taking up their time..........but at the hospital it turns out that my body was covered in hives, another symptom that i was nearing  the dreaded "Ana" shock". I'm not making light here, just recapping with some humor and feelings from my perspective. My mantra here is "never second guess yourself" because you are worth second guessing". From Jeff's perspective, he said, "while you had nerves of steal, I was scared shitless".

They kept me for the afternoon in the ER, checking on me,listening to my lungs, watching the hives "resolve", chilling get better, nausea dissapate, clarity from me and so on. Was sent home to "follow up with allergist and continue benedryl PRN".

So there you have it, my first DRAMATIC post. I drew this pic tonight, (quoting jeff that i am a "marked woman" since they seem to go after me.....)

I am doing well tonight. have spent 2 days in bed, ankle still swollen, but has to go down eventually, right? thanks for reading. xoxo 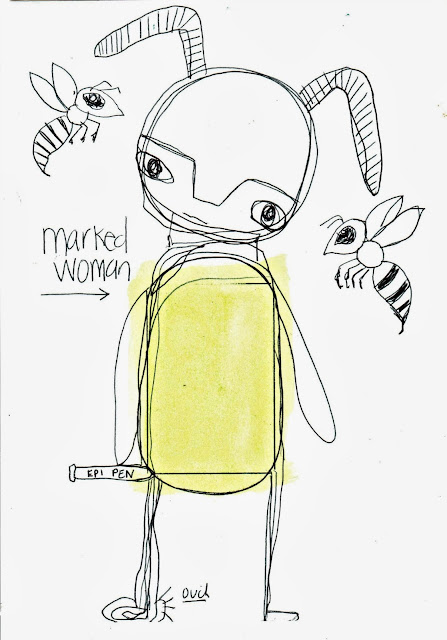