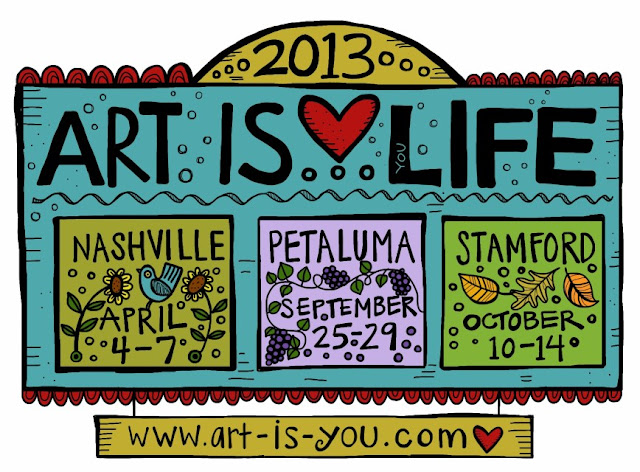 "Come. Join the Art is...You family in 2013 for a retreat that is all about Community through Creativity. Artists across the country are waking up to the power of each other, coming together.
Now in three venues: Nashville, Petaluma or Stamford, Art is...You is an ALL INCLUSIVE joyous week of art workshops, all lunches, panel sessions, heart starter mornings, and suppers each night."
You will be amazed at all that is offered when you attend one of these fabulous retreats that Sal & Ellen put together. This will be my 5th year of teaching for Sal and Ellen. They events are always amazing, full of spirit and friendship and much needed girl time. (although we have fun with the guys there too ;)

Workshops will be going up real  soon. We are busy finalizing all our wonderful workshops so be prepared for some awesome classes!

What to expect: FUN!, laughter, meeting new friends, running into old friends,  friendly faces, abandoned art, comfy sheets, creating amazing art and sharing in an Art Adventure. Don't be shy and don't be nervous. Adventure is out there. See you soon!

****Give yourself permission to play and REGISTER your intention to attend by paying a refundable deposit of $100.00.  This deposit will secure your spot and ensure you will get first opportunity to register for any or all retreats***

feel free to email me at: keeshagirl4@aol.com with any questions about attending an art retreat. especially if it is your first time and you are feeling "nervous".

Labels: art is you, art is you art retreat
Email ThisBlogThis!Share to TwitterShare to FacebookShare to Pinterest 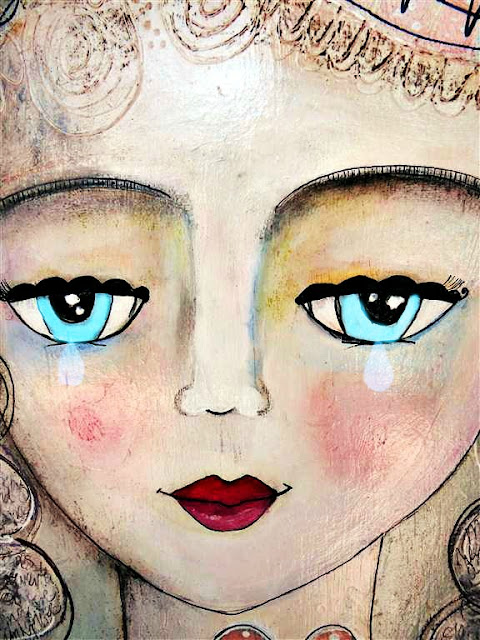 Alot has been going on since I last really posted. Mid Fall I left to head to Florida to visit Dillon and was doing some teaching along the way. I taught in North Carolina at Random Arts, a two day jewelry class and stayed with my friend, Phyllis. We had so much fun and she was a wonderful hostess. Right after I left Phyllis and made my to Georgia to stay the night, I got a text from Jeff that Tucker was quite ill and had been taken to the hospital via ambulance. This was 2 days after hurricane Sandy hit. Everyone had lost power and the coast was a mess. The ER was equally a mess. Utter chaos (according to Jeff since i wasn't there).

I made the immediate decision to cancel the rest of my classes and turn around. It took me 3 days to get back as I had to sort of criss cross around avoiding hard hurricane hit areas, etc. I picked up a generator in Georgia before leaving (as ours was not working well). I also loaded up on fire logs, D batteries and gas cans.  When I got about 2 hours from home, I filled up the gas cans and had to drive with the windows down for the rest of the way.

The hospital staff (infectious disease) hit Tucker hard with an course of hard hitting antibiotics to battle this unknown bacteria he was fighting. (i say unknown as nothing ever grew in a culture). He continued to  get much better and got to come home the day after we regained power. A few days later, we thought he was acting ill again, so took he back to the ER and they admitted him overnight for observation. By the next day, he was fine again. So i don't know if we were paranoid or what was with that 2nd trip.

Since then I have been battling anxiety attacks. mostly at night, waking me up with a pounding heart and grim thoughts running through my mind. I have this feeling of not being safe for me and Tucker. I'm having horrible dreams about him and the worry is affecting my appetite. Add into the mix, my friend, Michele, being so ill. Since I last posted about Michele, she's been diagnosed with breast cancer (in addition to lymphoma) and is undergoing chemotherapy. In a few months, once chemo is over and the tumor has been reduced, she will undergo a double mastectomy. A lot for me to be worrying about.

I know that I am going through post traumatic stress disorder. It's happened before, only not this harshly. Today, I am going to be doctor to talk about it with him and figure out ways to get a handle on it. 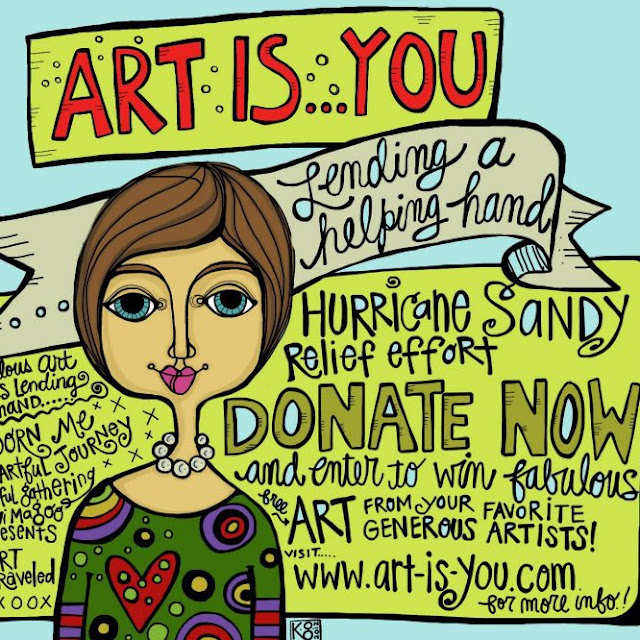 Join Art is...You, Adorn Me! An Artful Journey, Artful Gathering and Vivi Magoo presents
- as we raise much needed funds for essential personal and household items for those affected by Hurricane Sandy.


Working with Family to Family and local relief agencies we will have your donation delivered directly to where it is needed - into the hands of those who have lost everything.  Let them see how we can unite and Live in Generosity.  Let them feel our love.


Just click on the DONATE NOW Button and you will have the opportunity to make a cash donation or purchase actual items including groceries or gas cards.  Once you have donated, please share on Facebook, tell your friends - get the word out that this village of artists, their family and friends are united in rebuilding the lives of those around them.


I have personally donated this painting to the cause: 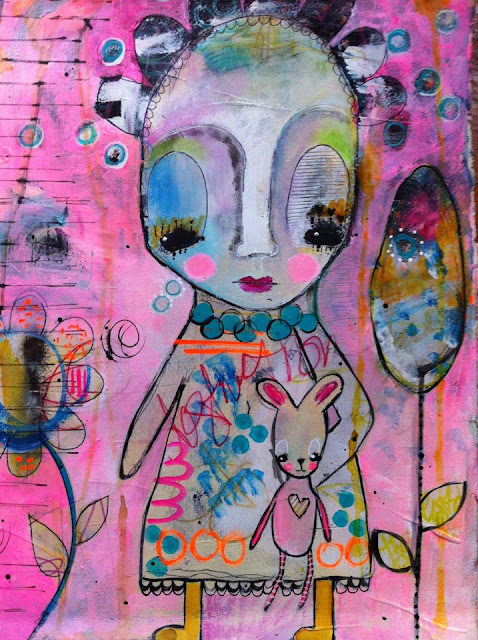 I painted her  the other night as I sat in my powerless house and used a light powered by my generator. The little girl in the painting is afraid and clings to her bunny as life around her is in tatters. The flower represents HOPE as the storm begins to calm.