Mary's Place by the Sea

On Saturday May 9th, 1200 walkers turned out to raise funds for Mary's Place by the Sea, a house in Ocean Grove, NJ, dedicated to providing services for women with cancer. Team Michele, walked in honor of our dearly beloved and sorely missed friend, Michele Taylor Koehler. She passed away January 23rd, 2015. She raised funds herself for the home a few years ago, inviting all her friends and family to walk with her. It was a little sad to be walking without her, but nonetheless, we carried her in our hearts that day (and always).  I was proud to raise $2100 for the house through an art auction that I held online on facebook. The support was much appreciated. 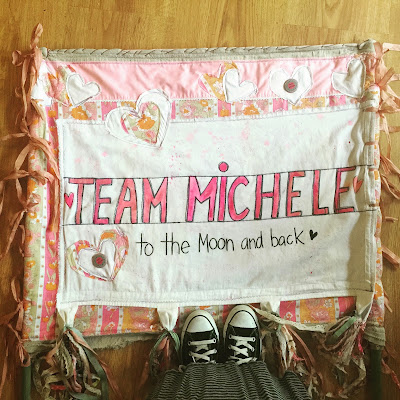 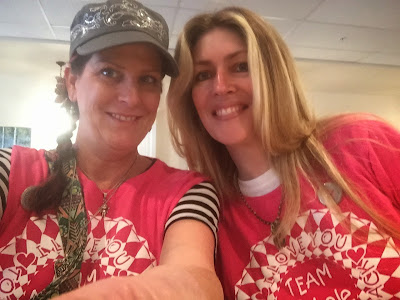 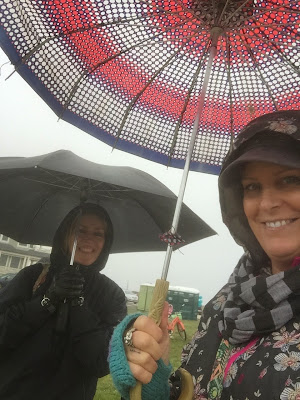 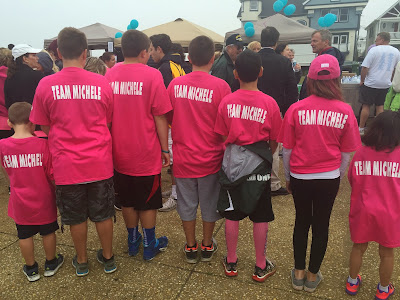 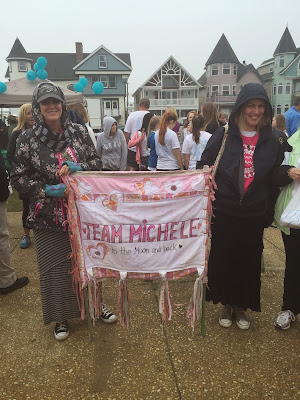 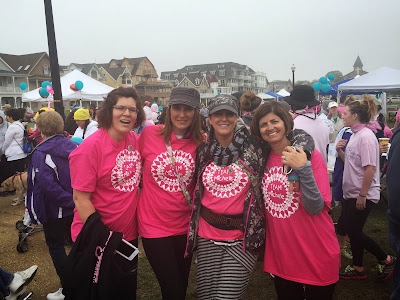 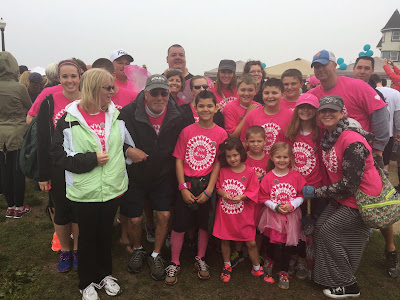 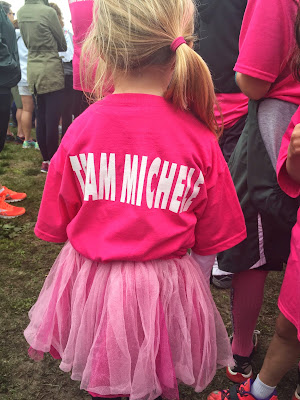 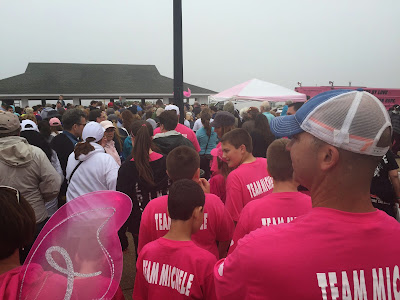 So how did you spend your Mother's Day? This post is to share how I spent my mother's day.

No, I didn't go to some delightfully, delicious brunch. And no, I didn't spend my morning sipping yummy tea and smelling my beautiful roses that I received. (I'm detecting some sarcasm here).

So how did I spend my morning? Well it all started with this hole and a missing puppy named Ivy: 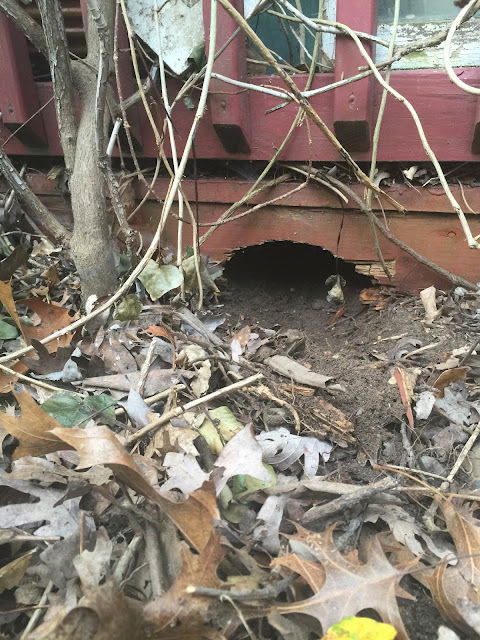 I was outside with Ivy cutting some wisteria for a picture I wanted to post on fb (that would be this picture): 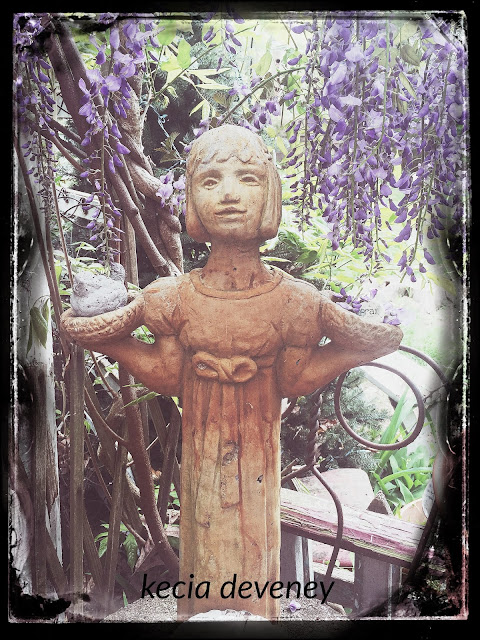 When I was done taking the picture and ready to go inside, I call to Ivy. But she doesn't come. And she doesn't come, and she doesn't come. I run into the house thinking maybe Jeff let her in (and mind you all total, from her being with me and then gone, about 2 minutes). Nope, she's not in the house. Jeff comes out and we start looking everywhere. Calling her name, looking in the field beyond my house, the neighborhood next door, and out front. No Ivy. Last week, Jeff said she tried to get under the deck (where we suspect a raccoon was living over the winter). But he had blocked all that off. I double checked that area and yep, still blocked. So we start taking a flashlight to look through the grooves in the deck and I said, what about this part of the deck? (it juts out from the main part of the deck and there is very little space under there). So on a hunch I go to the other side and clear out some of the leaves and little wrought iron fence  and find a hole. Hmmmmmmm.

Not many other options, but to start pulling up boards and seeing if we can see her. (and part of me was still worried that she had some how gotten out of our gated backyard and was running wild throughout Wall Township. 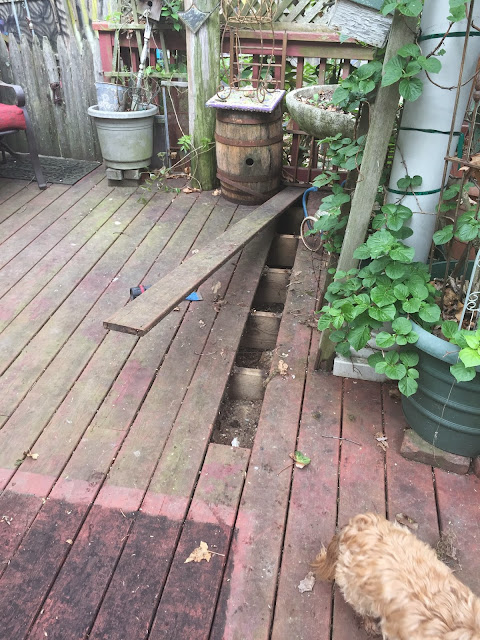 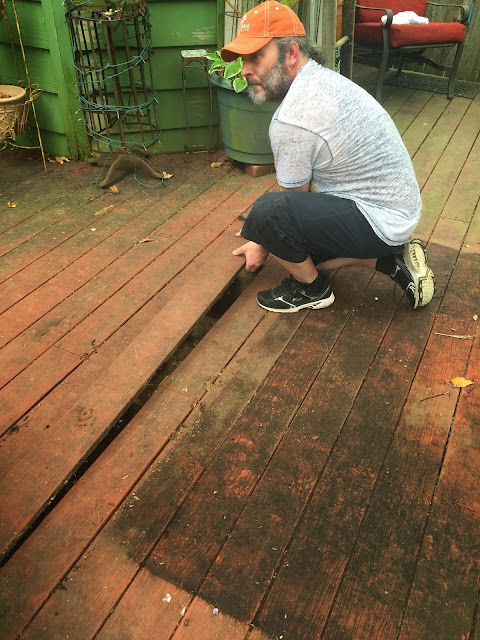 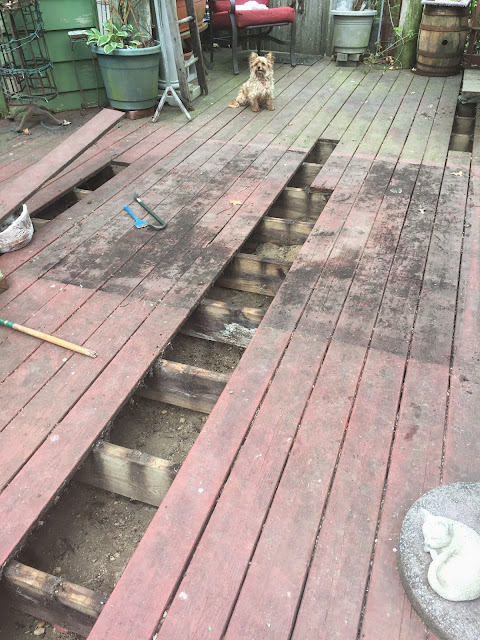 We pulled up some boards and then start going through the pattern underneath to see where she might be.  Finally Jeff can see her all the way at the end of the deck, near the hole 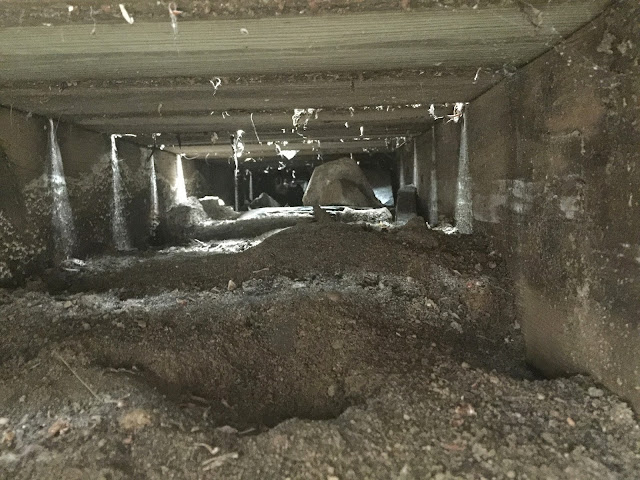 (you can see her eyes glowing to the left of the big rock on the right side) i took the picture by putting my head into the opening and pointing my cell phone towards the other end.

So then we have to go pull up another board towards that end, which is now just turning into a big mess. 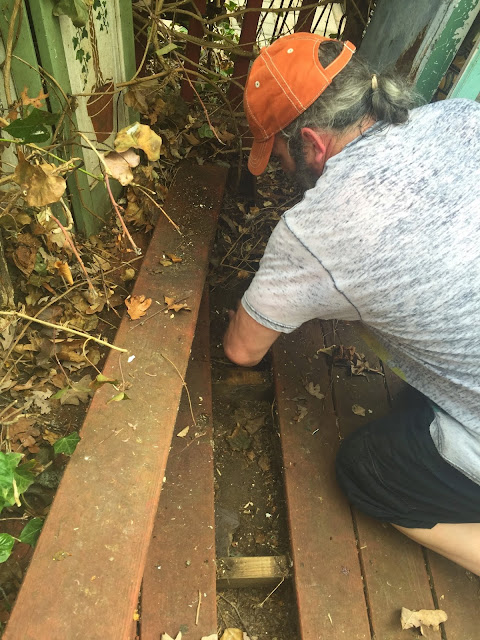 we get the board up and try and pull her out, but she is STUCK. she couldn't even make a sound, she was so stuck. all we could see was her tail. Jeff cleans out a bunch of dirt and then we have to remove yet another board.

Finally as Jeff pulls up the other board, I can put my hand underneath and grab her collar, while moving more dirt out of the way. She is finally able to wiggle and I pull her out. 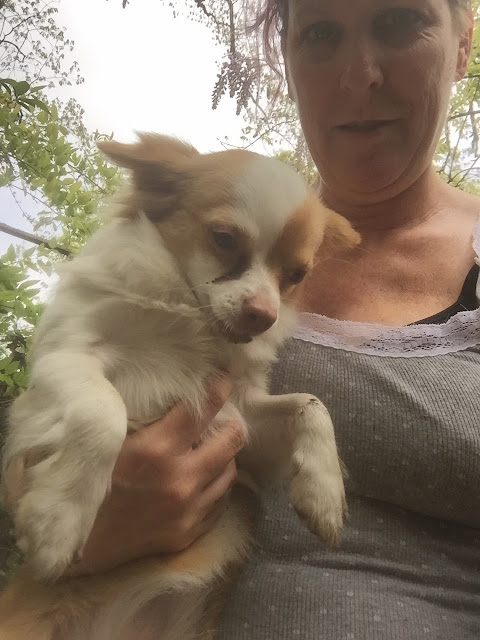 HOORAY! she was quite scared and filthy. so she got a bath and then cuddle time to settle down.  Jeff and I decided we were exhausted by the whole event. So happy Mother's Day to me, I am off to bed!
Posted by kecia deveney at 7:38 PM 3 comments 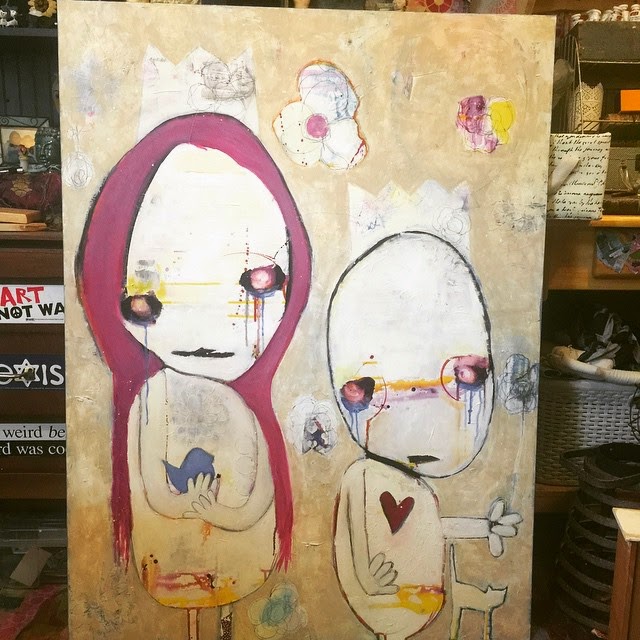 I've been wanting to blog for awhile, but really lost my heart for it. Maybe I needed to take a break from it in order to be excited to blog again. Then on January 23rd, I lost my best friend, Michele, to breast cancer (triple negative, a very aggressive form of breast cancer) - so that really closed me off to the outside world as I grieved. Slowly, I feel myself returning. Not from the sadness, but I feel my voice (the one who tells all my stories), is returning. My path has been diverted, but I'm taking advantage of that to solely be living life for what I want and not what others are expecting of me, or what I think I should be doing. I'm sort of just letting life evolve. I'm saying NO more often to things that I don't want to be doing (but in the past, would say YES, so as to not let others down). The only expectation I want anyone else in this world to have of me, is understanding. Understand me and let me be who I want to be without anything else. I love others for who they are no matter how different they live their lives or the choices they make and I now expect that for myself. Otherwise I no longer feel like engaging that sort of person in my life. New doors are opening for me and I'm excited about that. Not teaching very much this year and I'm enjoying the time off. While I LOVE teaching, it's a lot of hard work. And for someone like me, who already has a full time job (let's make that LIFETIME) job of being a caregiver; honestly, things outside the house can be very overwhelming and exhausting. And that's not even covering how much self pressure I put on myself to be there more than 100% for the students or the event. I have some new goals for myself and I'm excited to put them in action. I have to return to the fun side of art. My friend would be proud of me, Michele, besides my husband and sons, was my biggest cheerleader when it came to my art. Always encouraging me, asking about my travels, wanting to see new art and hear the stories behind the pieces. I really miss that.

p.s. the painting above, is one I recently did. It reflects me and Michele. Currently it is hanging in a boutique in Belmar, but I look forward to getting it back and hanging it in my studio.

also, I have a new website: keciadeveney.com
Posted by kecia deveney at 10:12 AM 0 comments