How I came to get my new kitten

Around July, I noticed a beautiful calico roaming the neighborhood. The dogs would bark at her as she sauntered by and then disappeared into the woods.
Let me back up. A few months earlier, My husband had put down a moratorium, saying “no more cats”. (After my Lilly passed away, I had said I wanted another kitty, but every time I brought it up, the idea was met with resistance.). So I decided to put it out to the universe that if I couldn’t adopt a cat, then could a cat please adopt me?
So when I saw this calico, I went out and bought some dry food. When I’d see her, I’d run out and shake the box at her. I’d see her sporadically and then not again for about a month or so.
Eventually she showed up again and
, I began the process of feeding her again. Eventually I got her to come over to our side yard. She’d sit under Tucker’s van and wait for us to feed her. I started calling her kitty girl. 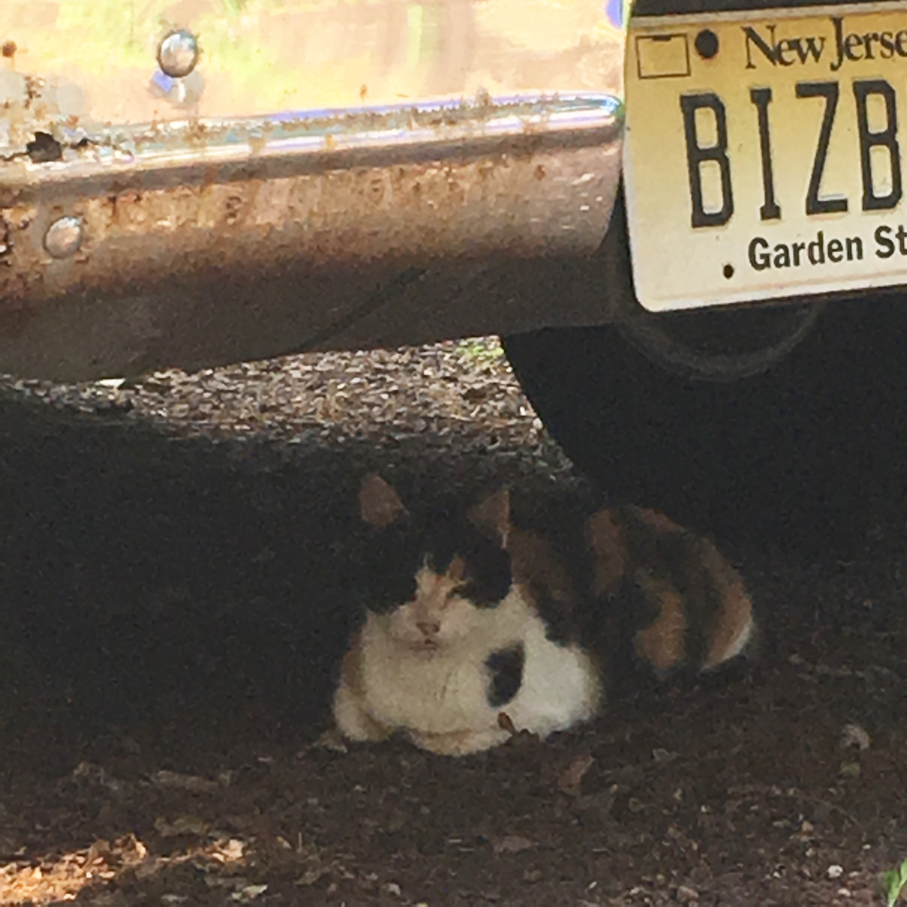 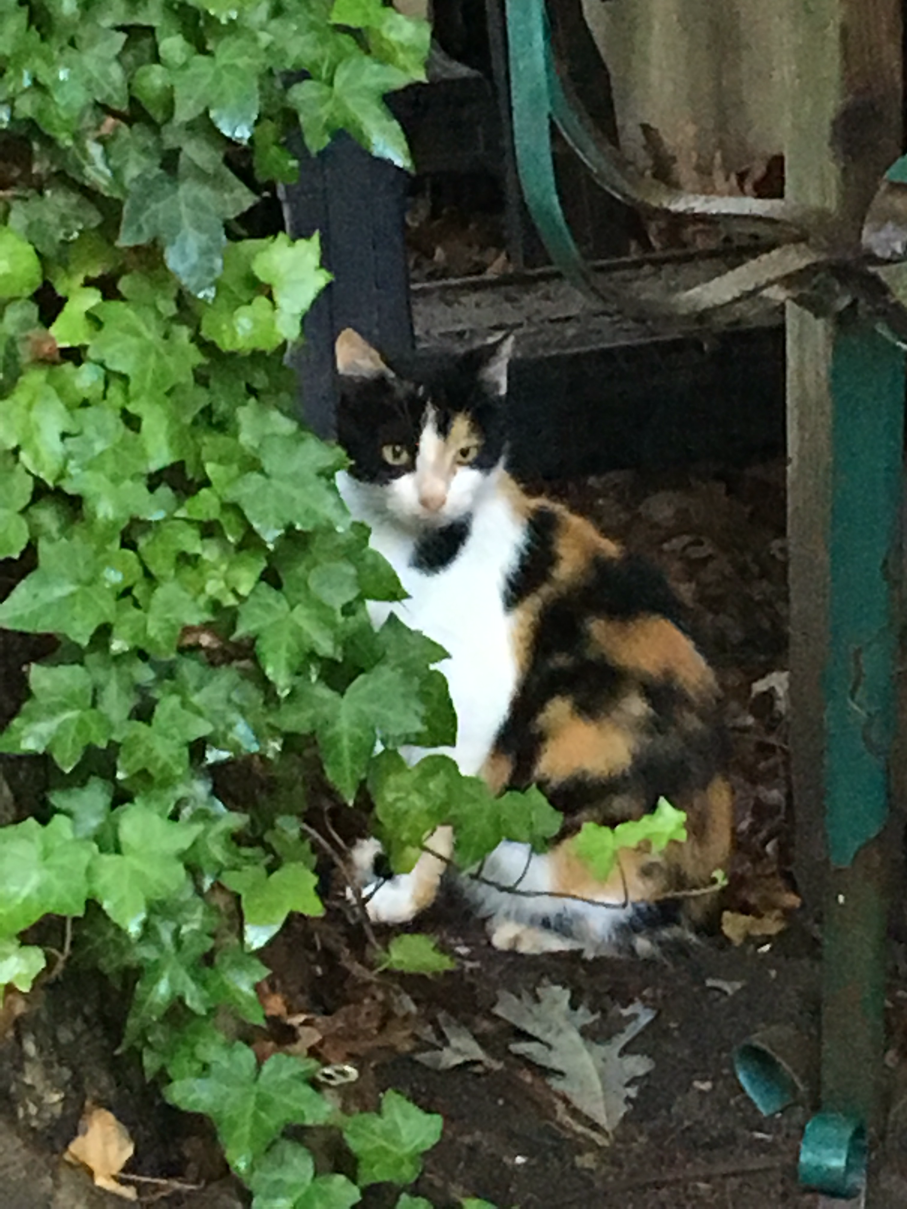 After a few days of feeding her and seeing her up close, I suspected she was pregnant and probably due anytime.
Then on a Tuesday, we had a new roof put on. We didn’t see her all day and suspected it was probably too noisy for her. We saw her again Wednesday  morning and I noticed right away that she had given birth. Thus began the great adventure of finding the kittens.
She’d come two, sometimes 3 times a day to eat. We started giving her probiotics and a vitamin supplement and also adding chicken to her diet for added protein. She was big into hissing at us and wouldn’t let us get to close to her, but she began coming up onto the porch and waiting for us to come out with her food. She was working hard. Then she’d head off into the woods. A few times I snuck behind her and began to think I knew where she was headed.
I came up with the plan to follow her. So next morning when she came, Jeff fed her and I ran into the woods ahead of her and hid behind the garage of the house where I thought she was going. The Jeff called out, “she’s coming back”, so I ducked down behind some bushes and waited.
When she walked by, the other side of the garage, I walked parallel to her and peaked around the corner of the yard. She snuck under a blue tarp that was covering old furniture, a mattress and other junk like that. She had her babies in the back yard of some neighbors who had let their property go and it was junk and trash. We’d also heard they had sold the property as is, so we began to feel like we needed to find those babies quickly for their safety and before they went feral.
I spent the next few days doing the same thing. While she ate, I’d discreetly try and look in the pile. I was starting to get uncomfortable being on their property, so the next time I saw one of them, I casually said I was trying to track a stray cat and could I check the back yard. (I really didn’t want them knowing about the kittens).
The next morning, with permission granted, I ran over there and finally found them! There was a mattress leaning against an old recliner and when I lifted it , there they were!   I thought there would be more, but gratefully, there were only 3. 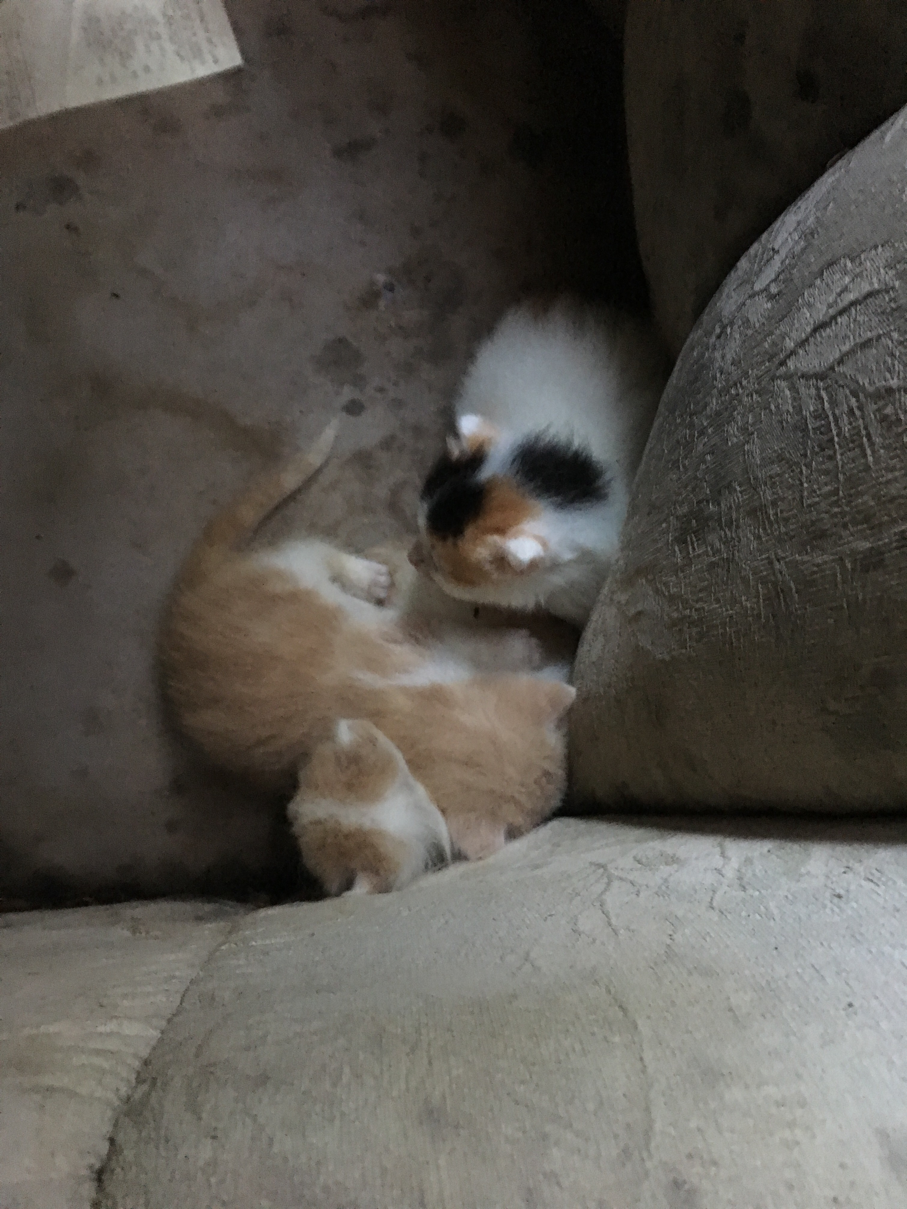 I was working with a feral cat rescue group and the plan now that the babies were found, was to take them when they were about 4 weeks old, where they would begin a foster program. Then we would capture momma and have her spayed.
Around 3 weeks, I came home to find momma  sitting at the bottom of our ramp which was very unusual. I knew something was up. So while she ate, I snuck over to the property and sure enough, that back area was now being used, bikes parked by tarp, garage door open. That meant the wayward daughter “with issues” was home. I didn’t like it.
It was decided I would go over in 2 days and get the babies. Longest 2 days ever. Finally that morning I snuck over early, my heart pounding. Pulled back the mattress to get them  and they were gone. I didn’t know what to think. Had she moved them or had the homeowners found them?
To be continued.
Posted by kecia deveney at 10:12 PM