i had a little studio accident this morning. (kind of freaky, really). i was finishing up a pair of earrings for a client and i was trying to remove some dried resin from around the little port where i would connect the earring hook to the charm. i was using a very tiny embroidery hook and well..... i ended up impaling it through my finger. how gross is that? my hands were a little slippery and i held the piece up in the air to see the port better..... it all happened so quickly. it went through my finger and almost out the other side. no one was home and my car wasn't here. i took a look at it and said to myself "uh-oh, this isn't good". i considered pulling it out, but then remembered the hook at the other end and thought better of it. thank goodness there was no blood - but the pain - oh yeah...... i called my neighbor/doctor, but he was out. so i called his office and they said come right down. called jeff and said, come home, i've had a slight accident (he was just down the road). i was a little peek-ed at that point, no color, sweating, nauseaous, etc. of course, i had the druthers to snap a picture of it though!

everyone at the office wanted to know how i did it. i finally started saying i was drunk as it sounded better than, "oh, i carelessly rammed it through my finger".... workers kept coming in to get a peek, which wasn't making me happy. i finally said, "oh come on, this is getting embarrassing". the doc gathered up his tools, gave me some numbing shots (OUCH!!!) - snipped off the long end of the hook, then slit a small incision on the other side (because he could feel the hook right there) and then pushed it through. i think jeff was taking pictures on his camera phone. i also had an xray taken and it looked good. no bone was hit, no foreign matter and just some tissue swelling. 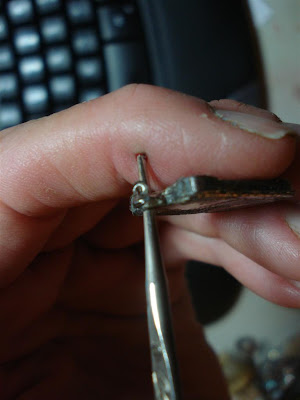 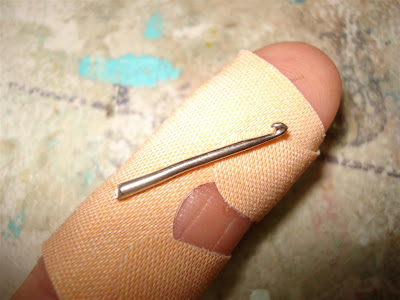 Posted by kecia deveney at 3:36 PM