finally finished this from artnsoul - what a pain! 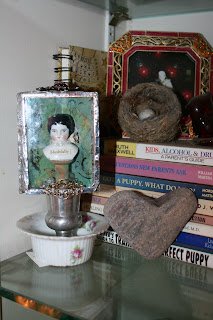 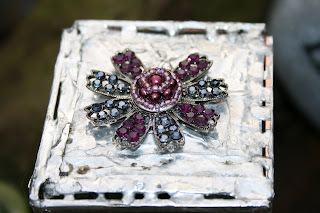 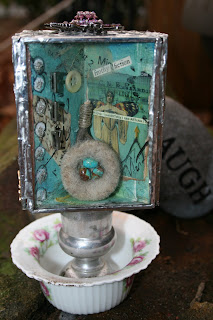 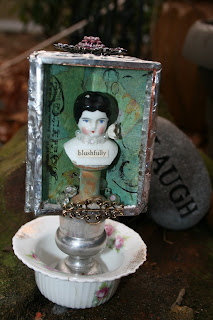 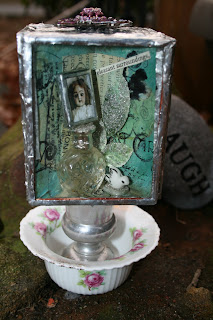 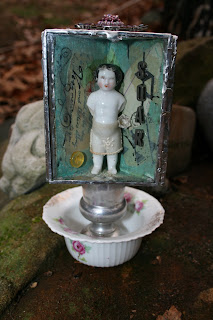 Here's another project i started in Oct. at Artnsoul in a Sally Jean Alexander project. the project was time consuming, so it was slow going working on it in class, which was fine. i knew i'd finish it once i got home. but then my soldering iron died and all of a sudden the holidays were here, etc. One of the reasons i didn't finish it in class though was because it was a very messy project. this piece used 4 pieces of glass which required a lot of handling to solder them together. i kept finding my fingerprints getting all over the glass (on both sides) and then the flux was everywhere, which you could see behind the piece after i had soldered it on. this i found irritating because flux is messy and looks really messy when i dries on a project and you didn't wipe it off. of course there was no way to clean off the flux behind the glass because it was now sealed, so i decided i would take the panels apart when i got home, clean them and then reassemble oh so carefully again using very little flux and keeping it as clean as possible.

yeah right! trying to take the panels off was a chore by itself. the base of this project is cardboard, so as i try to remove the solder, the cardboard was burning! then i broke a little corner of one piece of glass. but i forged ahead! i just retaped the burned edges with the foil tape and the broken corner was hidden under tape and solder. so it worked. but the flux was still getting behind the glass, no matter how careful i was. i think "gel" flux would have been ideal in this situation. even after cleaning it repeatedly, i still see fingerprints all over it as i was taking pictures!

i wasn't sure what i wanted to do for the base, so i started shopping around in my studio. i found a vintage egg thingy (where you place the hard boiled egg on it and then eat it from there....). i soldered this on the bottom, but it was still a bit top heavy, so i found a vintage shabby chic little dish that i glued the egg holder on. on top of the box, i glued a purple brooch and also added a little vintage filligree piece to the side that would be considered the "front". the very top photo shows the box in its new little vinette.
UPDATE: Yes, for those of you who have asked, it has 4 sides!

Posted by kecia deveney at 8:42 AM