this is a handmade vase of flowers and poem that i got from Tucker. it is so precious. 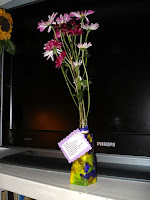 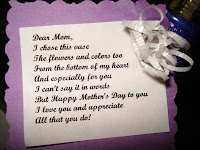 So how was your Mother's Day? mine was really nice. Jeff ran to his mother's house to pick up something and then he called me on his way back and said he had just found a garage sale and this guy has all that rusty junky stuff you just love. so he hurried home so that he could switch and take Tucker and i would go to the garage sale. he gave me some money and dillon and i left. it was great. it was an old guy, John, selling his worldly possessions. he was sitting in a wheelchair in front on his house, smiling and waving and talking to people. i dug through bowls of rusty stuff. dillon and i were picking through things. it was fun. then we went into the house and i bought this cool box of drawers. she told me i could have the box for $30 and everything inside. inside the box was an old dremel with a bunch of accessories. then there was a drawer full of tools that he used to do "scrimshaw" work, where he carved into ? I don't know if the surface he carved on was called scrimshaw or the hobby itself was called scrimshaw. anyone know? anyway, there were 2 drawers full of this material that he craved on. then there was another drawer full of exacto knives of all shapes and sizes. i didn't realize that there were so many different types of blades for an exacto knife. my guess is that they were all used for his craving as well. quite cool. after the garage sale, Dillon and I went to see "Iron Man" with Robert Downey, Jr. and Gwenth Paltrow. I really enjoyed this movie. i highly recommend it. it wasn't hokie hollywood as i like to call most movies. i felt it was done really well and i was surprised at how much i liked it. then when we got home, i worked on some of my grunge charms, using my new dremel on the background rusty part. jeff was outside doing some yard work and he came in and told me he just found another nest with 6 eggs in it. another house wren has built a nest on our back porch inside a wrought iron flower basket i have hanging on an old screen door (i'll post pic of it tomorrow). there are still some small flower pots in it (no flowers yet) and there is a ceramic plaque that says "sage" leaning against the pots. well she built her nest behind the plaque. the rest of the evening i spent getting dillon and then hanging in tucker's room. from tucker's bed, i was watching all the birds (finches, chickadees, nuthatches, titmouse, sparrows, cardinals and a bluejay) come to the feeders and birdbath. we also saw 2 tiny baby bunnies eating grass. i think they live under our shed. we also saw a little chipmunk. i finished up the day by watching "Forrest Gump" and having a bowl of icecream. 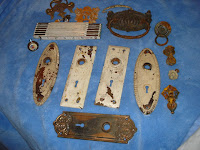 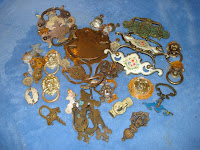 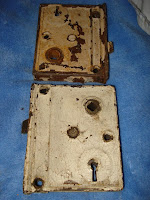 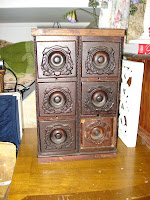 Posted by kecia deveney at 9:54 PM